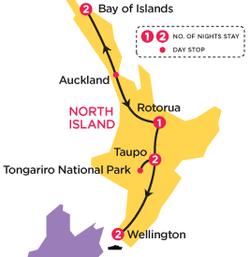 Land of the Kiwis. And sheep. And the most stunning place on earth.

I traveled to New Zealand with my best friend, Michelle, through TopDeck. As I had mentioned in my blog post, this was definitely one of the best weeks of my life. We spent 8 days exploring the North Island - from Auckland, the city of sails, to the Bay of beautiful Islands, to Rotorua - home of the Marae people, to the adventurous Taupo and ending in Wellington - home of Peter Jackson (AKA the director of Lord of the Rings).

Our adventure started in Auckland and to be honest, I had no idea what to expect from this entire trip. I would definitely recommend TopDeck to anybody traveling to NZ for the first time. They make everything easy and they showed us the best of this country - the North Island anyway (they do go to the South Island as well. It ends up being around a 2 week trip for the entire country). The first thing we did as soon as the TopDeck bus picked us up and "Wings", our bus driver, welcomed us, was drive to the Bay of Islands and boarded the house boat to sail around the hundreds of islands. This was a MUST do - the BEST way to experience all of what the Bay of Islands has to offer. We hiked, kayaked, went fishing, snorkeled for sea urchins, slept on this houseboat and were able to wake up to the most beautiful sunrise in the middle of the bay. We were shown different tiny islands that people bought for MILLIONS of dollars - just so they could say they owned an island, which wasn't even big enough to build anything on.
After sailing around the Bay of Islands, we were on our way to Rotorua where we would stay at a traditional Maori Marae - a temple-like building for the native Marae tribe. We learned about their culture and history after they did a ceremonial welcoming and cooked us a delicious dinner. The next morning we were welcome to one of many activities - white water rafting, sky diving, bungee jumping, hiking, zorbing and so on. I chose sky diving and after 5 hours of delays, broken planes and $600 later, I was jumping out of an airplane at 12,000 feet with the biggest adrenaline rush of my life, along with the best possible view of New Zealand that I could ever ask for. Afterwards, we toured the Whakarewarewa Village and Thermal Reserve to see all of the natural hot springs, geysers and mud pools where people today will still bathe in, wash their clothes in or just use a jacuzzi. The city is on a caldera and so it produces all of the geothermic activity and also the lovely sulphur (AKA rotten eggs) smell throughout the entire city. Yum.
We were soon off to Taupo. The "Adventure City of the North Island". We unfortunately only had one full day here but I knew exactly how I wanted to spend it. Hiking the 19km Tongariro Alpine Crossing - as seen in Lord of the Rings. Everybody was telling me that this was the most amazing part of their trip to New Zealand and so I was up for the 8 hour challenge - and it definitely didn't disappoint. This was easily the most stunning place I had ever been to. Walking in and out of craters, seeing "Mount Doom" from Lord of the Rings along with other scenes that were shot there, trudging up even more mountainous craters and seeing the gorgeous Emerald Lakes and Blue Lake from the top, and ending it with a hike through a jungle atmosphere.

This hike isn't impossible, but it's not the easiest. Plenty of water is necessary - we drank at least a liter each, be prepared to use the most disgusting bathrooms ever (imagine a permanent porta-potty with a toilet that doesn't have water. Just a giant hole.) Wearing layers is important because it can get super cold - although we were blessed with perfect weather and were able to just wear a t-shirt the majority of the time. However, it can get colder and colder as you reach higher climate (obviously) during colder seasons. A camera with panoramic capabilities is a MUST - yet I still feel like I failed to really capture the beauty of this place. But when is that ever really possible? It's nice to have a hiking companion that goes the same speed as you but more often than not, my friends and I would separate for long periods of time so we could all go at our own pace. Also, pack lots of snacks - we had plenty of PB&J sandwiches, turkey sandwiches, nanners (AKA bananas) and granola bars to keep us energized.

Amazing view from the top of another volcano.
After celebrating our successful hike at a local bar, we were off to Wellington the next day. Getting to Wellington was like going back to reality. Bay of Islands, Rotorua and Taupo were all much smaller cities with such a unique culture. Not to say that Wellington lacked culture by any means, but it was a much more populous and civilized city. Buildings and houses stretched over the hills of Wellington and we were able to explore the city on our own. We wandered around the city, bought multiple boxes of Goon that we drank all too quickly, drunkenly explored the best free museum I've ever been to (the 6 meter colossal squid is out of control!), and then drank way too much more at their many bars and pubs. It was the perfect way to end a perfect week - with debatably the biggest hangover of my life along with the best memories of my life. Until next time New Zealand:)
*For the extended version - as if this wasn't long enough - check out my blog posting about my fabulous week in the land of Kiwis